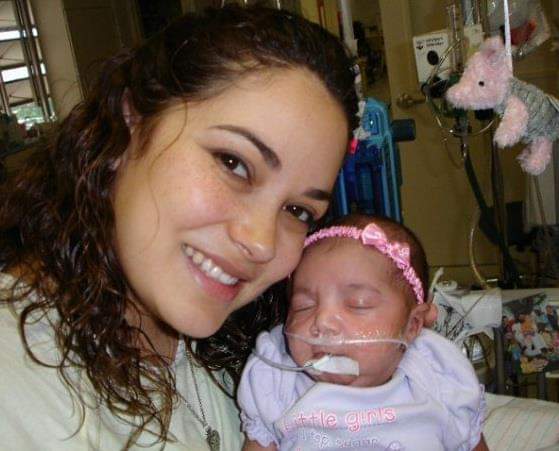 Posted at 14:17h in Families by Lizzie Glaser

My name is Catherine Alvarado. When I was 19 weeks pregnant, my unborn baby girl was diagnosed with Congenital Diaphragmatic Hernia (CDH) and given less than a 50% chance of surviving. CDH is a hole in the diaphragm that allows the abdominal organs to move into the chest cavity preventing the lungs from growing. It requires treatment with ECMO, a million-dollar lung bypass machine. The only civilian hospital in the area with one of those machines was 26 miles away in San Antonio.

I was 24 years old, had no reliable transportation to the hospital, and learned that my baby girl would be spending her first months in the Neonatal Intensive Care Unit (NICU) fighting for her life. I was terrified.

On April 18, 2006, Sofia was born at Christus Santa Rosa, now Children’s Hospital of San Antonio, and her fight began. I did not know how much time I would get to have her here on this earth and was scared to leave her side. I tried to go home for one night, and I lost it. I was supposed to be going home with a baby in my arms—not alone.

Help with Staying Near the Hospital

When I found out about the Ronald McDonald House at the hospital, I was so relieved. I immediately checked in. Being there, I was close enough to stay in the NICU late when it was quiet, cherishing every peaceful moment with my baby girl. I was available when there were emergencies and when there were victories. I even enjoyed home cooked meals from Ronald McDonald House volunteers, which were a welcome upgrade from the hospital cafeteria food that had become a staple of my diet.

On my first Mother’s Day, my own mother met me at the hospital. Shortly after, we found out that Sofia had been moved to the non-critical part of the NICU, and for the first time, we learned that Sofia would recover and be able to come home with me.

Having a safe place to stay near my daughter gave me time to recharge and be there for her in every way possible. Being together made us stronger, and on June 8, 2006, I checked out, and Sofia was discharged to go home with me.

They say “home is where the heart is.” In 2006, my heart was lying in a bed in the NICU in the Children’s Hospital of San Antonio. But thanks to Ronald McDonald House Charities of San Antonio®, I was able to stay near the care and resources my family and I needed most, free of charge. That’s what makes the Ronald McDonald House truly a home away from home—it keeps you close to your heart.

This Mother’s Day, keep mothers close to your heart by helping Ronald McDonald House Charities of San Antonio keep them close to theirs. Support our Facebook Fundraiser in honor of The Campaign for Families, or give now in honor of mothers everywhere.